Energy modeling is the most effective way to optimize energy efficiency for each unique building, yet it is severely underused. According to the AIA 2030 Commitment, less than 50% of all reported projects received an energy model in 2018, and in 2019, only 61% of reported gross square footage was modeled.

This is despite the fact that buildings are 32% more efficient when they are energy-modeled—to put it into context, that is the equivalent of planting an estimated 8.7 million trees each year.

Features of the modeling tool

Accessible: NEO is a web-based energy modeling tool that uses advanced baseline automation. It allows modelers to choose from multiple ASHRAE 90.1 standards to simulate projects anywhere in the world and under any jurisdiction. The NEO Results Report and LEED Appendix are a downloadable Microsoft Word document that NEO automatically populates with the modeling inputs, end uses and economics to describe the baseline and proposed energy models.

Accurate: Think of NEO’s automation as a “modeler in a box.” It leverages technology to bridge the gap for small design teams without an in-house energy expert and eliminates inconsistent results applying best practices to all sizes of projects. NEO provides results for hundreds of proven energy efficiency options, giving you real-time energy results in seconds, not hours or days. The automated Results Report builder provides peace of mind—you can hand over your report to a client or submit it for a LEED review knowing that NEO has accurately reflected the information contained in your model.

Affordable: NEO’s automation improves your bottom line. Traditional energy modeling requires the modeler build two separate—often very different—energy models for the baseline and proposed model. As an NEO user, you select the appropriate ASHRAE baseline and then build your proposed model. Right away, NEO cuts your modeling time in half by automatically creating the correct baseline model, informed by your selections. The automated Results Report builder adds to this efficiency by saving you hours on every project. It eliminates writing (and rewriting) reports and onerous paperwork. 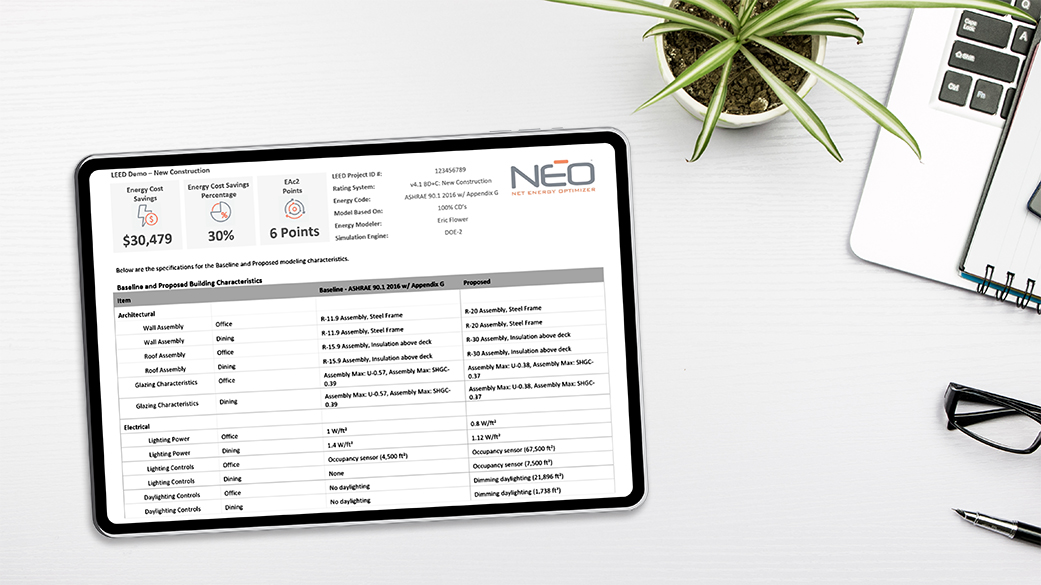 What’s next? Willdan is perfecting its modeling, submission and review process by adding a “LEED widget” to the user interface. The widget will provide real-time feedback of project point estimates to make faster, more informed decisions in constructing and maintaining higher-performing buildings.

GBCI is currently evaluating requests to use Willdan’s Net Energy Optimizer (NEO) for LEED documentation on a project-specific basis. Smaller buildings with relatively simple building envelopes, thermal zones and mechanical systems, as well as low process loads, will be prioritized for consideration. Project teams interested in using the NEO tool for their LEED project should contact GBCI for preapproval.

Learn more about the release